Originally there was an initiation ceremony within the Mayombe and Biyumba branches known as the malongo ceremony. This was the first step for anyone interested in joining a “house” or Munanso. Oftentimes, this was the only ceremony performed to an individual and was considered all he or she would need as a ceremonial rite as an ngangulero throughout his whole life.

Occasionally the ceremony known as malongo was performed  to the individual the very same day he would go to “consult” or “get read” by a Tata-nkisi. In such cases the individual was always in need of an urgent solution to resolve a difficult problem which was almost always health related. The Tata-nkisi would perform the malongo ceremony and the individual would agree to pay a “fee” usually in the form of a sacrificial offering, which would be paid on the day and time this person agreed and assuming he or she would have resolved his or her problem.

Sometimes the individual expressed an intention to belong to the “temple-house” or Munanso or it was marked in divination that they should undergo the ceremony because they had the spirituality to act in the capacity of a “congo officer” in the munanso. In these cases the malongo ceremony would take place and in doing so they were agreed to abide by the rules of the religious house and partake in secret oaths which involved keeping  the taboos of that Munanso. From that moment on the already “sworn” had the right to the ceremonial space of the munanso and depending on his performance could acquire many “powers” within the “juego de Palo” (Palo game or ceremony). 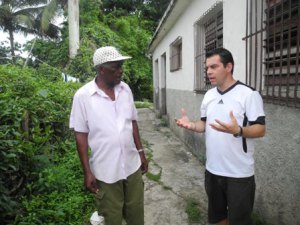 The malongo ceremony was performed to both men and women, and it was a very simple ritual involving cuts or marks with a sharp object in one of the two hands, depending on the situation and the Mpungu that reigned in the Munanso.

The malongo ceremony, could be performed many times throughout the lifetime of an individual for any number of reasons. It could to overcome  a problem or as part of the different stages that one passes in becoming a different type of “congo officer”. When the malongo ceremony took place for spiritual reasons, it was a kind of pact or “deal” between the neophyte and Mpungu that was mediated by the Tata-nkisi.