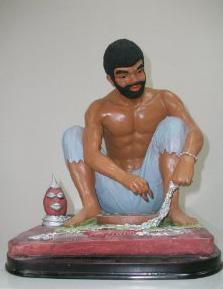 Recently I was contacted by a friend who is going to become an Orisha priest. He was very excited and I am very happy for him. During the course of our conversation he encouraged me to “leave my old ways” and go to “lighter” things, such as Ifa. This of course struck a nerve with me, but before I began arguing I asked him a few questions to gauge just how much he knew about Osha and Ifa. After several minutes I realized that the answer was not much. I was saddened because this individual is a Palero and his explanation ran along the lines of “Osha and Ifa is God’s work, it cures people.” He also explained to me that his “Ifa godfather” agreed with him. This only led me to believe that all the work he had done with Palo must have been negative. Sadly enough this was a reminder that many initiates have been indoctrinated into the belief that Palo is to be used solely for “witchcraft.” Ironically, Palo practices revolve around making “bilongo”, which literally translates into medicine.

Undoubtedly there are Paleros that use their practice for negative work. Years ago, during a similar conversation I was having with one of my elders he said to me, “just because there are people who do not live up to the highest spiritual principles of any faith does not invalidate that faiths claim to spiritual elevation. There are priests in every tradition who use their position to do harm.” That being said there are also numerous Babalawo and Orisha priests that use their position to do harm and perform negative rituals. The Lucumi Babalawo even has a fetish called Abita that is akin to the “devil.” If an Olorisha or Ifa priest make broad statements such as, “Palo is bad” they are denouncing an entire religious tradition and condemning it. This is no different than the Christian that condemns everyone that is not Christian, basically they do away with the entire Eastern Hemisphere. This is simply preposterous! Ifa priests are supposed to be priests of Orunmila, Orunmila is supposed to be “eleri ikpin” – the witness of destiny. So, what if it’s in a person’s destiny to be a Palero? If Odu is supposed to be the receptacle of every occurrence then isn’t initiation into Palo a possible occurrence? There must be Odu that reference this.

The argument that Palo is not “God’s work” and Orisha work is is also erroneous. Palo has a name for God. Sambia, Sambiampungo, Nsambi are all names used to reference God within Palo liturgy and almost all ceremonies open with an invocation to God. With the exception of the crucifix there is no object of adorationfetish that represents Nsambi, however the supreme Creator’s blessing is always invoked. I believe that God’s work is to help fellow man and the community and I believe that most people would agree with this, regardless of the religious paradigm which is used. The ultimate goal is the result. Just this week I was contacted by a gentleman who’s 2 year old daughter was severely disturbed by spirits.  So much so that the girl pulls her own hair out. An nsara (work) bilongo (medicine) was prepared and consecrated to Nsambi and Kalunga, Mama Umbo, to aid her. Is this not God’s work?  The woman who arrived at my doorstep unable to eat or drink due to witchcraft that had been done was severely dehydrated and at her wits end. She found strength and resolution through cleansing and work done over Sarabanda, is this not God’s work?

There are Babalawos and Olorishas that understand this point of view and highly respect Palo and its role among African Traditional Religions as they developed and are being practiced in the diaspora. The purpose of this article and this website is to disseminate accurate information regarding Palo and this is a topic that had to be addressed.