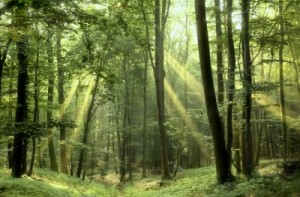 Gurufinda is the mpungo or spirit of the woods including all plants, weeds, vines and trees. He is the god of herbal medicine. Without Gurufinda, no potion, remedy, medicine, or magic could exist. He is the proverbial owner of Palo. All plants and sticks that grow in the forest are alive and inhabited with a strength that is derived from the earth, the sky, water that falls on it for it grow. Gurufinda is the deified representation of such pacts. His mention as well as the use of plants, weeds, vines and trees are worth discussion since their use is central to Palo practice. Palo practices revolve around beliefs in animism and the practice of sympathetic magic where like produces like. In other words everything around us is alive and contains a spirit which creates an action which can be duplicated by imitation.

The relationship between the Palero and the forest is such that as he enters it his first action should be to greet it identifying himself in traditional Palo fashion and to give it an offering expressing respect and gratitude. Afterwards the Palero should recognize the items he seeks for his work, which most often will be a tree or a plant or both. The Palero should be trained to recognize the proper use of the tree or herb and should approach it with respect and make it an offering. Oftentimes the efficacy of his work will depend on the relationship created between the Palero and the tree or herb, since the Palero believes the plant is a living spirit its unwillingness to work for him would be detrimental. Because of this he must know what plants and sticks can be approached during specific times of the day as well as a particular stage in the lunar cycle depending on the desired effect of the work.


The above video courtesy of www.maiombe.com was filmed in Cuba and shows the intimate relationship between the Palero and the most important tree of the forest, Ceiba Ngundu. It is believed that the Ceiba (silk cotton wood) Tree is so powerful that in it inhabit all spirits, the respect and adoration for the tree is so great Paleros gather around it to sing and drum.

As with most things in Palo, the right to enter the woods, gather plants and sticks is granted via a ceremony and reception of an object representing Gurunfinda, this initiation grants “licensia” – license or permission. The object representing Gurufinda is hung in a gourd or pouch called a makuto, or resguardo de Seke in many houses. In rare form you will find this Mpungo inside a cauldron. He can also be put in a clay dish. Gurufinda is considered to be one of the initiations that help “complete” the Tata in his road to becoming Tata Ndibilongo Tuyembere. In today’s day and age where Palo is practiced in areas where most plants and sticks are readily available many of the items necessary are purchased either at a botanica or over the Internet. This does not invalidate the work being done, rather if the Tata does have licensia, he must perform the proper ceremonies and incantations on the items in order for them to be effective.